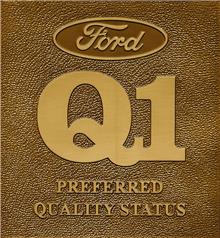 Prior to entering the certification process LUKOIL had adapted its production and logistics to Ford standards and introduced an electronic data exchange system between client and supplier. The car manufacturer has conducted a series of technical audits of LUKOIL’s manufacturing site in Perm over the last 18 months, and highly rated the Russian lubricants company’s performance.

“We are very glad to be given an opportunity to further develop our partnership relations with Ford, a recognized technology leader. The certification helped LUKOIL join the global list of Ford suppliers. We will be able to take part in global tenders on lubricants supply in all regions of the world as well as to join the pool of potential developers of new products for Ford,” commented LUKOIL Lubricants Company General Director Maxim Donde.

“Compliance to strict Q1 quality standards is a must for all current Ford suppliers of components and consumables. The number of Russian companies with efficient quality management systems is growing. It helps us raise the level of manufacturing localization. LUKOIL is the first Russian company to join the list of Ford global lubricants suppliers,” stated Ford Sollers President and CEO Adil Shirinov.