GAZelle Next sales launch in Georgia 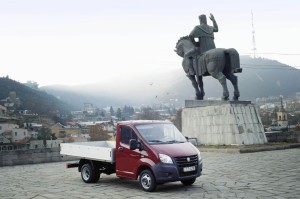 At the sales launch event potential customers were shown the base versions of the new vehicles, including the cargo and passenger/cargo versions as well as 19-seat frame buses. Representatives of carriers, Tbilisi town-hall, Georgian ministries and agencies also got acquainted with different versions of specialty vehicles based on GAZ chassis: ambulances, fire engines and various superstructures intended for commercial customers.

The personnel of Strada Auto company, a GAZ dealer in Georgia, have received special training and been certified to comply with GAZ standards regarding sales as well as servicing of all vehicle types.

“GAZelle Next features excellent handling, a high level of the driver’s comfort, favourably compares to its competitors in terms of pricing and has a long warranty. We expect this vehicle to be a huge success both among private entrepreneurs and among corporate customers.”

“Today GAZ offers world-class products both in the segment of light commercial vehicles and in the medium-duty trucks segment. These vehicles from the very beginning were developed with the foreign markets requirements in mind. Thanks to their combination of low cost of ownership, excellent functionality and reliability the Next family vehicles become the best choice for business, social and municipal spheres. Development of export sales is one of the priority tasks for our company and it allows not only increasing production volumes, but also diversifying the sales markets and insuring against exchange rate fluctuations.”