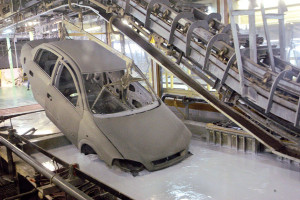 Zaporozhye, November 26, 2007 – During 2001-2006 the ZAZ (Zaporozhye Automobile Factory) made no norm-exceeding release nor exceeded maximum permissible concentration norms. The main activity of the plant during 2001-2006 was oriented to reconstruction of production equipment, development of new production processes and modernization of nature conservative target objects. Total amount of atmospheric air protection costs during 2001 – 2006 made 10.545 million Hryvnia/UAH (as currency of 30.12.2006 – €1.5855 million).

In 2001-2004 annual harmful substances release volumes in atmosphere were reduced by 104,887 tons. In 2004 reconstruction of Final Shop was finished including replacement of touch-up painting booths equipped with hydraulic filters for paint spray recovery by up-to-date Blowtherm painting-drying booths, which made it possible to reduce harmful substance release in atmosphere by 4.323 ton/year. The same year Body Shop-1103 was equipped with new electrostatic filters FES-4000. This allowed reducing paint spray and carbon monoxide release by 5.163 t/year.

In 2005 in Paint Shop they finished construction and commissioning of the plastic parts painting area with high efficiency gas purifying stations of Eisenmann with installation of solvent vapour afterburning (the cost of equipment made about eight million Euros, including 380,000 Euro which was spent for construction of gas purifying stations). Due to commissioning of the plastic parts painting area the old paint shop (site B) was taken out of service, which made it possible to reduce harmful substance release in atmosphere by 54 t/year.

In 2005 Environmental safety bureau specialists of Environment protection division developed harmful substance atmospheric emission indicators (specific release) from the main productions per produced unit, i.e. per one car, and obtained approval of them in Ministry of environment protection of Ukraine. This makes it possible to regulate performance of statistical reports on harmful substance release in atmosphere, as well as take ecologically grounded decisions for further reconstruction and modernization of production.

In 2006 in Avtomashlityo Ltd. construction and commissioning of gas purifying station behind electric arc oven DSP-1,5 were completed. Cost amount made 175,000 UAH (as currency of 31.12.2006 – €26,312), and harmful substance release in atmosphere was reduced by 0.778 t/year. Besides, in 2006 in Paint Shop the solid paint line was reconstructed with replacement of hydraulic filter system, which made it possible to reduce harmful substance release in atmosphere by 8.6 t/year.

Execution of all mentioned activities allowed reducing harmful substance specific release in atmosphere from 7.5 kg/car in 2004 to 6.75 kg/car in 2006.

At CJSC ZAZ 11 recirculation water systems with total capacity 3.584 m³/h are involved. For protection and conservation of water resources (fresh water saving is 93.6%-98%) a number of nature conservative activities was performed in the company – construction of a mechanized car wash with purification facilities and closed cycle of water consumption in SSS Autotransport, repair of filters with replacement of stop valves in production waste water purification facilities, development and implementation of production waste water phosphates and nickel etc. purification methods. Total cost amount for protection and conservation of water resources during 2001 – 2006 made 12.89 million UAH (as currency of 31.12.2006 – €1.938 million).

The concept was developed for separate collection of non-metal wastes. There is a system of material encouragement of subdivisions for efficient work on collection and delivery of waste secondary raw materials.