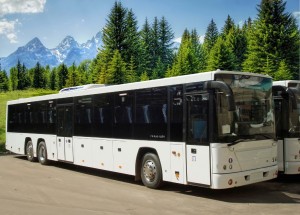 Gilching/Sochi, January 22, 2014 – Spheros has received a contract worth about € 5.5 million to install heating and air conditioning in a total of 850 GOLAZ and MAZ buses for the Olympic Winter Games in Sochi.

The preparations for this major project have been underway since 2011, when the Russian GAZ Group and the Belarusian MAZ Group were declared official bus suppliers to the Olympic Winter Games 2014.

The Olympic dream thus also came true for bus air conditioning manufacturer Spheros. In the past few months Spheros has installed climate control systems in 400 GOLAZ and 450 MAZ buses: not only – as one may expect – heaters and water pumps, but also series-manufactured air conditioning units.

Depending on the type of bus, the Aerosphere Tropical 350, REVO 350 and REVO 250 rooftop units were installed. This was the first time they have been deployed in Russia. The air conditioning units were delivered for implementation directly from the Spheros plant in Turkey to the bus plants at Golyzino near Moscow and Minsk. The heaters (Thermo E) and water pumps (Aquavent 5000S) were manufactured at the Spheros plants in Neubrandenburg and Lvov.

Spheros is also guaranteeing effective service during the Olympic Winter Games: 14 service technicians will be available around the clock to ensure smooth operations in Sochi. After the Olympic Games the majority of buses will be transferred to the vehicle fleet of Moscow transport undertaking Mostransavto for operation on regional routes in the Moscow area.

Helmut Zanker, CEO of the Spheros Group: “We are very proud to participate in an important project of this kind and to have won a major contract in Russia. Spheros has once again demonstrated its international competence in a major sporting event.”

For many years the international Spheros Group has been a global trendsetter in the manufacture of economical, eco-friendly and reliable heating, ventilation and air conditioning systems for buses. Spheros is the world market leader in heating and air conditioning systems. Directed from its company headquarters in Gilching near Munich, Spheros guarantees customer proximity and service at currently 21 sites all over the world. With a total workforce of about 700, the company generated sales of about € 170 million in the financial year 2012.