Bolechowo, January 25, 2018 – In the course of over 20 years Solaris Bus & Coach S.A. has accustomed clients to regularly expanding its offer, as it kept adding more innovative vehicles to the vehicle range. In 2006 Solaris was the first European producer to launch serial production of hybrid buses, whereas since 2011 its offer includes electric buses. The latest project of Solaris’ Office of Research and Development (BBiR) is a bi-articulated trolleybus of 24 metres.

After the recent unveiling of an innovative trolleybus equipped with hydrogen fuel cells as range extenders, made for Riga operator Rigas Satiksme, the development department of Solaris Bus & Coach is now working on a completely new addition to the company’s offer – a bi-articulated, three-unit trolleybus measuring over 24 metres. 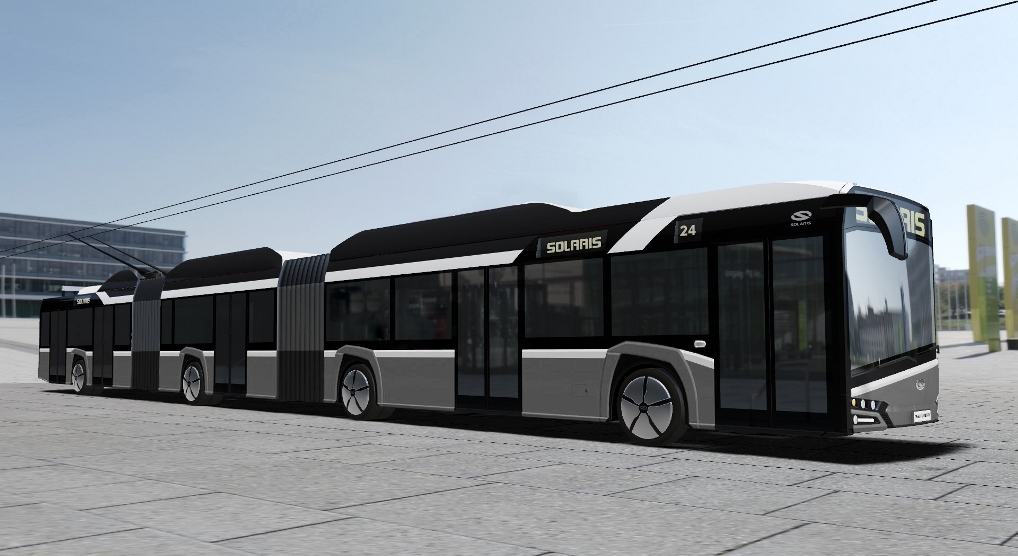 The idea behind the prototype vehicle – the new Solaris Trollino 24 – is to create a platform for the future, serial production of 24-metre hybrid or electric drive vehicles and trolleybuses. The end of the production of the bi-articulated trolleybus is scheduled for mid-2018. Next they will be delivered for test drives to selected European cities and during those rides the vehicle attached to a trolleybus overhead line will undergo further type-approval tests before it can be released for passenger traffic.

The latest Solaris product will be highly advanced in technical terms. The driveline will consist of two traction motors propelling two drive axles. A pack of 94 Ah (58 kWh) batteries installed in the bus will be recharged during the drive, collecting current from the overhead line via a bipolar pantograph traditionally applied in trolleybuses. What is more, the energy accumulated in the batteries will be used to fuel the trolleybus whenever it detaches from the electric traction. In order to ease manoeuvres in urban traffic, the fourth axle of the vehicle will be a steering axle.

Apart from featuring a unique door layout of 2-2-2-2-2, the vehicle will also be fitted with an electric power steering (EPS) pump. The air-conditioned driver’s cabin will be equipped with a heated and vented swivel seat allowing for a maximum ergonomic setting for the driver’s convenience. Drivers will also have at their disposal two 8-inch screens displaying the view from one camera directed at the pantograph and another external camera installed behind the second bus articulation.

Another must for the driver’s cabin is the screen allowing the driver to monitor views from CCTV cameras installed at the doors as well as from the rear-view reversing camera. The vehicle will also encompass a comprehensive passenger information system consisting of trolleybus destination displays and three 29-inch screens installed in the passenger compartment. In addition to the former the passengers’ comfort will be guaranteed by a more efficient air conditioning system and numerous USB ports enabling the recharging of mobile devices mid-ride. The interior lighting of the innovative trolleybus will be made of energy-saving LED technology.

A total of 53 seats has been provided in the passenger compartment, 16 of which are accessible from the low floor, which ought to facilitate access for passengers with reduced mobility. The producer has also provided space for wheelchairs and prams or pushchairs and a bay for bicycle transport.

Solaris Bus & Coach added trolleybuses to its offer already back in 2001. Since then nearly 1,200 vehicles of the type have been ordered and supplied to customers from 16 countries. The new Trollino 24 is innovative through and through and at the same time it will constitute a platform for the development of new additions to the Solaris portfolio.