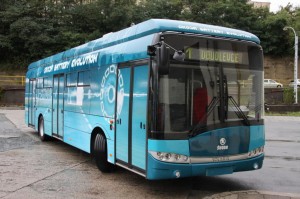 Plzeň, September 19, 2013 – Plzeň-based Škoda Electric has developed and produced their own new concept of a battery-powered electric bus. The company wants to use this modern ecological vehicle to build on the success of its trolleybuses, of which several hundred will be produced next year mainly for foreign customers.

The new vehicle will be introduced in a public premiere today on Wenceslas Square, Prague in the Mobility Week campaign and subsequently also in the Czech bus fair focused on the issue of road transport.

“There is a growing emphasis in the world on reducing the negative impacts of transportation on the environment. It is mainly big cities that are looking for environmentally friendly solutions and we offer such solutions. After trolleybuses, hydrogen-powered buses and hybrid vehicles, we are coming out with our own concept of a battery-powered electric bus”, says Jaromír Šilhánek, CEO of Škoda Electric and further comments: “The interest to at least partially replace conventional buses with internal combustion engines with zero-emission (e.g. battery-powered) buses has been recently announced by a number of not only European, but also Czech large cities. During the development of the electric bus, we proceeded with the conviction that the impetus for the development of electro-mobility should not be just the possibility of support from EU institutions, but also a reasonable economic rationality. “

Škoda Electric is coming to the market with electric buses, whose benefits are, beside a more ecological operation, also lower operating costs than those of conventional buses with internal combustion engines. “Our goal is not merely to offer the vehicles, but also to bring a comprehensive service solution, tailored to each customer’s needs. Such a solution brings infrastructure including charging stations. We are working on the charging system for the buses in bus stops as a part of the vehicle’s development. There is also the possibility of collaborating with the reputable company ABB and using its already tested solution “, explains Karel Majer, Head of Škoda Electric Trolleybus division.

Škoda is currently working on the development of two basic types of electric buses. Both are twelve-meter low-floor buses with a power output of 160 kW, whose design makes use of the latest technological trends and modern solutions.

The first type of Škoda electric bus, which will be presented in September, will have a range of about 150 km and its charging will take place at the depot during the night, when the vehicle is not in operation.

The production of the second type of bus, with an average range of about 30 km, is planned for next year. The vehicle will be designed so that the battery can be recharged quickly – in a matter of minutes – at the terminals and bus stops.

“Both types have their advantages – depending on their specific routes and also on which type of vehicle charging solution the customer wants to use,” says Karel Majer.

Škoda Electric is working with the concept of eco-friendly vehicles as a long term project and the company is synonymous with environmental-friendly emission-free transport. In addition to the development and production of traditional trolleybuses, it has also unveiled a hydrogen-powered and later a hybrid bus to the public. The experience from the ambitious development of modern vehicles of these types has also found use in the development of the electric bus concept, an endeavor into which the company has invested tens of millions of Czech crowns.

“Our engineers and technicians have completed the first prototype, which we offer for commercial use. In addition to the most advanced Western countries, where environmental-friendly transport is increasingly emphasized, we see possible markets in Central and Eastern Europe. For example, in the Czech Republic, we are negotiating the operation of a new electric bus in Plzeň”, says Jaromír Šilhánek.