Volgograd/Moscow, February 1, 2018 – President of LUKOIL Vagit Alekperov and Governor of Volgograd Region Andrey Bocharov participated in the launch of a solar power plant at the company’s refinery in Volgograd, today.

The 10-megawatt power plant, constructed at idle land lots of the Volgograd refinery, will produce 12 million kilowatt-hours of power and provide for an annual reduction of CO2 emissions by 10 thousand tonnes.

The project became possible thanks to the state program supporting the development of renewable energy sources in Russia.

Alternative energy projects help reduce the company’s environmental footprint and contribute to business diversification. LUKOIL operates a large portfolio of power- generating facilities running on renewable energy sources. Thus, the company owns four hydropower plants with the total capacity of 300 megawatt in the south of Russia, an 84-megawatt windfarm, Land Power, in Romania, and two solar power stations at the refineries in Romania and Bulgaria, generating 9 megawatt and 1.25 megawatt of power, respectively. 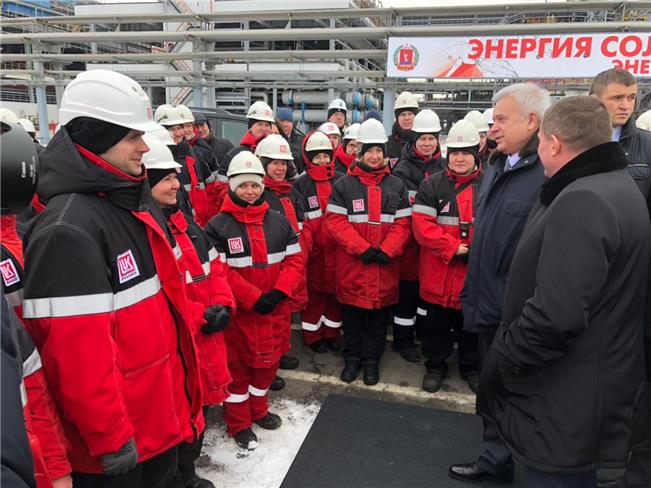 During the working visit to Volgograd, Vagit Alekperov and Andrey Bocharov also met with employees of LUKOIL Group’s companies operating in the region and awarded a certificate of merit from the Governor and a letter of gratitude from the LUKOIL President to Nina Stanovskaya, a retired worker of LUKOIL’s wholly owned subsidiary RITEK, for her labour achievements and on the occasion of her 95th birthday.