KrAZ-Spartan to Ministry of Interior Affairs 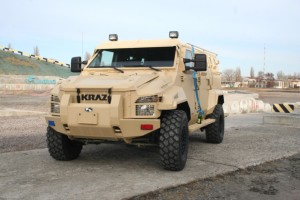 Kremenchug, December 29, 2014 – Just before the New Year AutoKrAZ transferred the KrAZ-Spartan armoured vehicle to Forensic Science Research Centre of the Ministry of Interior of Ukraine. The vehicle has been transferred at the company’s proving ground by General Director Mr. Roman Chernyak who gave keys and certificate to Deputy Head Forensic Science Research Centre of the Ministry of Interior Affairs Mr. Konstantin Dubonos. In true tradition, a bottle of champagne was broken over the hull of Spartan. Forensic examiners have tested the vehicle on the proving ground after transfer in solemn atmosphere. After obstacle courses, Mr. Dubonos emotionally praised high mobility of the vehicle in spite of eight tonnes of weight and speed. He also said that they had placed an order for the KrAZ-Shrek vehicle scheduled for production in the beginning of the next year. These armoured vehicles will replace foreign vehicles, off road performance of which makes it impossible for them to get to sites where IEDs are planted. “When choosing vehicle for use in missions we were studying the market very carefully. We opted for KrAZ-Spartan because there is no equal vehicle in Ukraine. The vehicle will be provided with various equipment and used for explosive device disposal in the territories freed from militants”, says Mr. Dubonos. Source: AutoKrAZ