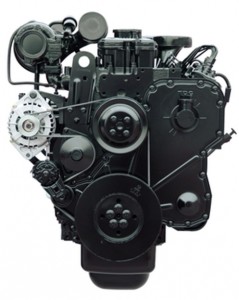 Kremenchug, September 18, 2014 – AutoKrAZ switches to Cummins engines from the leading world designer and manufacturer of diesel engines. A first large batch of the Cummins L360-20 engines for installation on vehicles intended for the Army of Ukraine has arrived.

The Cummins L360-2 is a 360hp six-inline engine with maximum torque of 1480 Nm and displacement of 8.9 l. The engine is provided with BOSCH fuel system.

This model features in-line fuel injection pump that delivers diesel fuel at higher injection pressure ensuring better fuel combustion and reduced emissions. Moreover, it is compact and has a high power-to-weight ratio, easily fits under a hood of the KrAZ truck. SAE 1 flywheel and its housing allows for paring engine with EATON, ZF and other transmissions. The weight of the Cummins L360-2 engine is 650 kg less than the weight of the YaMZ engine. The lighter engine allows increased payload capacity and better performance.

According to operators, this engine has a reputation for its reliability and long life ensuring excellent performance under any operating conditions. It should be mentioned that AutoKrAZ has an experience of providing its trucks with the Cummins engines but these were one-time shipments. Currently KrAZ switches to alternative power packs to equip its trucks with them in large scale.