KrAZ Completed Performance of Contract with ARE

Kremenchug, December 19, 2013 – PJSC AutoKrAZ has completed performance of the contract signed with the Ministry of Defence of the Arab Republic of Egypt.  A large lot of KrAZ truck tractors was manufactured and prepared for inspection in accordance with the contract. 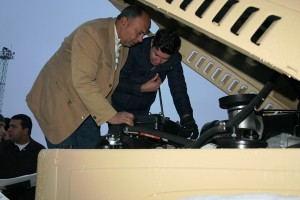 The inspection of 80 KrAZ-64443017 truck tractors took place December 16-19. The vehicles have been inspected by the specialists of the Egyptian MOD Vehicle Department. Officers checked vehicles for compliance with contract specification, checked their speed and hauling capability.

The customer’s representatives were very glad with inspection results. After on-the –road testing they emphasized that KrAZ trucks are very maneuverable. 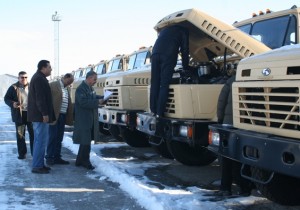 It should be mentioned that the batch lot of KrAZ-6443017 truck tractors made under this contract was shipped in June of this year. The vehicles supplied to meet the needs of the MOD of Egypt, according to officers, tackle their job.

At different times, since 1961, Kremenchug Automobile Plant supplied to Egypt over 3,500 KrAZ trucks.