KAMAZ truck with automated driving is available for testing 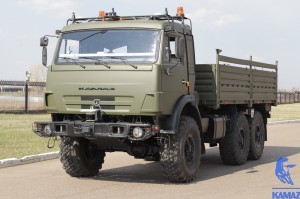 Naberezhnye Chelny, June 4, 2015. – Next week at secluded proving ground at Noginsk, Moscow region, testing of first automated truck produced by KAMAZ (a part of Rostech State Corporation), VIST Group and Cognitive Technologies will start. Mounting of the equipment of the first KAMAZ truck with automated driving was finished in May at Research & Development center of KAMAZ. Components such as radar, “lidar” (light detection and ranging, an active optical sensor that beams towards a target when vehicle is in motion), video cameras, communication systems and on board computers necessary for trying out different modes of automated driving were mounted onto mass produced truck KAMAZ-5350. Mobile remote control station was assembled i.e. joystick, with the help of which it will be possible to remotely control the vehicle. Earlier in city of Naberezhnye Chelny the truck underwent pre-proving ground tests, which confirmed quality of assembly and workability of all the systems. As it was recently stated by Sergey Kogogin, General Director of KAMAZ, mass production may start in two years the earliest. Sergey Nazarenko, chief design engineer for innovative products, R&D center of KAMAZ, shared some details of upcoming tests. “During first proving ground tests two trucks will be utilized, one is automated driving truck based on mass production vehicle and the other is regular KAMAZ”, he said. “The second, regular truck is needed to try out platooning and other driving modes.” Specialists of VIST Group and Cognitive Technologies have started with tuning and teaching truck different driving modes. Around 10 driving modes including remote control, route following, platooning, etc. are planned for testing. It is also planned to try out self-driving of the truck with information received from video cameras and GPS/Glonass signals, without any help from radars and “lidar”. Tests suppose to show what truck “sees”, and whether distance is measured correctly or not. Recognition system that recognizes objects perceived by video signal is constantly being debugged in order to achieve 100% recognition. During tests, of course, there will be a driver inside the truck just to be safe. We would like to remind that works related to “Autorobot” are carried out in 3 directions: SmartPilot, AirPilot and RoboPilot. The first one is creation of smart assistants for vehicle, which assist driver, i.e. they can activate brakes in case of danger, or run adaptive cruise control. The second direction is AirPilot which means creation of a vehicle with remote control. And the third one, RoboPilot, allows vehicle run without driver or in autopilot mode, when the driver can get away from driving the truck for some time. It is expected that by 2025-2027 such trucks with automated driving can appear on public roads.