GAZ Group Launch Production of GAZelle NEXT in Turkey

The new vehicle was presented to the Turkish business society at the Istanbul Park rink near Istanbul built for Formula 1 races.

“Today, GAZ Group has modern products that can successfully compete in the European and other export markets. The company is investing around 12 billion rubbles (around 300 million US $) into development of the Next LCV and LDT product portfolio. All the developments are taking into account the export market requirements.

“Export development is one of the key focuses of the GAZ Group strategy. It motivates the automotive companies to engineer high tech products and provides for the production ramp up”, said Oleg Deripaska, Chairman of the Basic Element Supervisory Board. 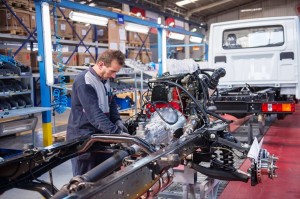 GAZelle NEXT SKD assembly operations were established on the Mersa Otomotiv plant in the city of Sakarya, 150 km away from Istanbul. The key components and systems of the vehicles are delivered from Russia, while some components (propeller shafts, wheel discs, batteries, braking system elements) are purchased from Turkish manufacturers.

The dealer network was prepared and Turkish specialists were trained before the start of sales. 24 dealer centers and 38 certified service stations were started up in seven regions of the country.

“We offer to our Turkish customers the vehicle combining excellent functionality with low cost of ownership and the best price in the class. The Turkish market is one of the highly competitive markets where the majority of global OEM’s are present. However, I am sure that customers will appreciate the advantages of the Russian vehicle”, said Vadim Sorokin, GAZ Group President. 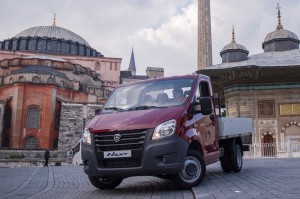 The Next vehicles designed using the best technological solutions meet the state-of-the-art standards of ergonomics, reliability, safety and comfort. The vehicle was engineered based on the thorough study of the customer opinion and using engineering resources of the global manufacturers of systems and components.

In 2014, GAZ will obtain the unified Europe a vehicle type approval permitting to sell GAZelle Next vehicles in the European Union. Certification tests were carried out both in Russia and abroad. The emission tests were performed by Applus+ IDIADA, Spain, because the reis no equipment for Euro-5 emission tests In Russia. Compliance with 43 safety requirements was confirmed, 113 global certificates were received including 74 certificates for components: safety belts, tires, glasses, etc.

The exports share within the GAZ commercial vehicle sales has grown from 13% to 18% for the last two years. The growth was caused by the sales increase in the CIS, South-Eastern Asia, North Africa and Middle East.