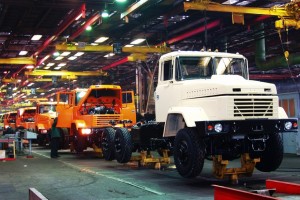 Kremenchug, August 05, 2014 – Despite an instable political and economic situation and military operations conducted in the south-eastern part of the country, Ukraine’s only heavy duty commercial vehicle manufacturer, AvtoKraZ, has seen a 44.2 percent production increase in the first seven months this year.
In the period between 1 January and 31 July, 610 trucks were made in the town of Kremenchuk. Sales also rose by 34.5 percent in the first seven months. This year, AvtoKrAZ sold 90 percent of its output at export markets.
The production structure is dominated by chassis with cabs and trucks with a classical freight compartment.
Company officials said that a 30.5 percent increase in the production of spare parts, the total value of which had reached 31.3 million hryvnias (1.92 m €) in the first seven months, was also a success.
At the same time, the production of the foundry also rose by some 30 percent reaching the total of 40 million hryvnias (2.45 m €).