A Half-millionth Chevrolet NIVA is produced in Russia 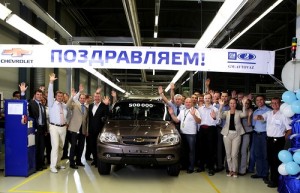 Today, the JV produces the car of 5 trim-levels: L, LC, LE, GLS, and GLC. Chevrolet NIVA sales are held by 153 dealers in Russian Federation, by 7 dealers and 3 distributors in CIS countries.

Chevrolet NIVA production of the new generation will begin in December 2015. “It will be a promising product as for the Russian market so for Chevrolet brand in whole”, the President and Managing Director, GM Russia and CIS, James Bovenzi assumes. “This is the first and the biggest project within the Special Economic Zone. New operation will become an anchor resident and set an example for the others”, said the AVTOVAZ President Igor Komarov on the day of the ground breaking ceremony of the production facilities of GM-AVTOVAZ’ subsidiary – JV Sistems – on the territory of the Special Economic Zone “Togliatti” to produce New Generation Chevrolet NIVA.